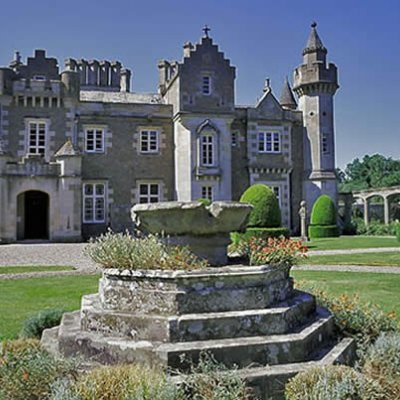 After the success of his first epic poem, The Lay of the Last Minstrel, published in 1805, Sir Walter Scott settled down to write a similarly long work climaxing on the battlefield of Flodden, entitled Marmion. This tragedy commanded a special place in the history and culture of the Scottish Borders, and Scott’s lines in Marmion include many melancholy and metaphysical reflections on the region’s changing seasons. They were written at Ashiestiel, the country home that Scott had rented near Selkirk in order to carry out his duties as Sheriff-Depute of Selkirkshire. Marmion was published in 1808 to great acclaim and it was Scott’s continued success as a poet that reinforced his determination to purchase a property of his own.

He acquired the estate at Abbotsford in 1811 and over the next fourteen years built the house that was to become the archetype for Scottish Baronial architecture throughout the world.

Walter Scott was the foremost literary figure of his day. Born in 1771, and outliving by the time of his death in 1832 all the great romanticists except Coleridge and Wordsworth, he was incomparably better known than any of them.

Scott was the first English-language author to have a truly international career in his lifetime, with many contemporary readers in Europe, Australia, and North America. His novels and poetry are still read, and many of his works remain classics including Ivanhoe, Rob Roy, The Lady of The Lake, Waverley, The Heart of Midlothian and The Bride of Lammermoor.

The Waverley Novels, as Scott’s 26 novels came to be called, were the world’s first real historical novels and the world’s first best-sellers. They paved the way for the great popular novels of the Victorian age, influenced Pushkin and Tolstoy as well as George Eliot and Dickens, and earned him the money to buy land, to plant trees and to build Abbotsford.
Scott inspired more operas than any other writer except Shakespeare. His literary reputation introduced him to the great men of his time, and he developed friendships with Wordsworth, Coleridge and Byron, Lawrence, Turner and Humphrey Davy, Cumming and Wellington. The Prince Regent conferred a baronetcy on him and, when he became George IV, encouraged Scott to orchestrate the first royal visit to Scotland for 60 years.
After the financial crash of 1826 and the subsequent fall of many companies, Scott’s publisher and partner became liable for debts amounting to £20m in today’s terms. Although Scott’s own personal liabilities were modest, he elected to pay off the entire debt on his own and stated that “my own right hand shall do it” and for the remaining years of his life he devoted himself to his self-imposed task.

Abbotsford is the exclusive creation of Scott. It was where Scotland’s greatest son created a notion of Scotland that was more romantic perhaps, but also higher, more honourable, more noble, than it had been in the past, and in consequence raised Scotland’s reputation in the world. Here he worked diligently and the result was the legend of a great man which exists for so many people across the world to the present day.
Abbotsford until 2004 was under the care of the Maxwell Scott family, and in 2007 passed into the care of The Abbotsford Trust, a charity created to safeguard the future of the estate and the legacy of Sir Walter Scott. It is the objective of the trustees to ensure that Abbotsford becomes the centre of a renaissance of Scott’s works, but in a way that a modern audience will appreciate.


The above courtesy of Abbotsford House - for more information use the link below.
http://www.scottsabbotsford.co.uk
Post code for satnav
TD6 9BQ
Grid Reference
NT508343
Link
http://www.scottsabbotsford.co.uk
Opening Times
Follow link above.
Admission
Follow link above.
Facilities
Visitor centre with permanent free exhibition on the life and legacy of Sir Walter Scott, as well as a gift shop, licensed restaurant and toilet facilities. There is also an adventure playground for children and several sign-posted walks around the estate. Dogs are welcome outside the house and gardens.
Parking
Visitor centre car-park with spaces for 120 vehicles.
Directions
Abbotsford is a mile from Galashiels and two miles from Melrose in the heart of the Scottish Borders. It is easily accessible from Edinburgh (35 miles) and Newcastle (70 miles). Major routes: A1, A68 and A7. Look out for signage.
Swap Start/End
To Top