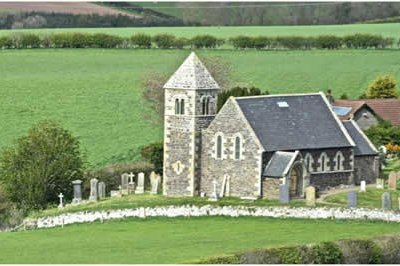 Though extensively rebuilt during 1849 the Church of St Paul was originally constructed in the medieval period and may stand on the site of an older timber church.

During the days following the Battle of Flodden it served first as a temporary mortuary and then as the site of the burial of some of the casualties.

The Chancel arch is the earliest surviving element of the church dating to the 12th Century, though even this seems to have been modified or reconstructed during the 13th Century.

Much of the small Church of St Paul as we see it today was constructed during extensive renovations in 1849. The exterior is of ‘snecked’ rhyolite with sandstone dressings. A porch stands at the west end of its south face and there is a small tower with peaked, stone roof at its north-west corner. Entering through the porch you will find yourself in the nave, which was entirely built during the 19thcentury. Nevertheless the space is beautifully lit by its large and mostly plain-glass windows and has an airy feeling provided by the white painted walls and high open roof, the beams of which spring from stone corbels.

The oldest element of the building is the Chancel arch, parts of which, including its carved capitals, date to the 12th Century, though its peaked arch, as we see it today appears to have been constructed during the 13th Century. Beyond the arch the altar dates to 1960 and was made by the Yorkshire craftsmen Thompson’s of Kiburn, while the altar rails are said to be made from the timbers of a ship, which sank off the Farne Islands during the 19th Century.

While no accounts talk of the church on the day of the Battle of Flodden, it is not unreasonable to assume that it may have functioned as an infirmary during the afternoon of 9th September 1513 and in the hours of darkness that followed. In subsequent days its role changed and it was used as a temporary mortuary for some of the dead. Again no records exist of who these dead were though some sources suggest that James IV’s body was laid in the church prior to being removed to Berwick and thereafter to London. It is equally likely to have been used for English casualties of more senior rank along with the bodies of Scottish nobles, whose remains needed to be secured against battlefield scavengers.

Oral tradition suggests that one of the burial pits was excavated within the consecrated land of the churchyard. Again it is unrecorded who was buried here though it is reasonable to assume that it included some of the English dead who laid in the church when it functioned as a mortuary. The remains of Scottish nobles were for the most part removed to Scotland in the days following the battle, by groups such as the nuns from the Coldstream Priory who travelled to the battlefield to offer care to the wounded and to retrieve the (important) dead.

The Church of St Paul in Branxton is a Listed Grade II building.
Post code for satnav
TD12 4SN
Grid Reference
NT89213749
Opening Times
Daylight hours, outside of services.
Admission
Free.
Parking
Limited parking on the verge to the south of the church. Alternatively park either in Branxton village to the east, or in the battlefield car park to the west and walk.
Directions
From Cornhill - follow the A697 south for 2 miles, until you see signs for Branxton on your right. Follow this single track road for 1 mile, until you reach a T-junction on the west edge of Branxton, by the village hall. Take the very tight turn to the right (almost back on yourself) and follow the road for a further 200m to the church on your right.

From Wooler and the south - pass through the village of Milfield on the A697 and continue north for 4 miles, until you see the turn for Branxton on your left by the Bluebell Inn. Follow this winding, single track road for 2 miles into the village of Branxton. At the far end of the village (by the village hall), take the left turn and continue for a further 200m until you reach the church on your right.
Swap Start/End
To Top