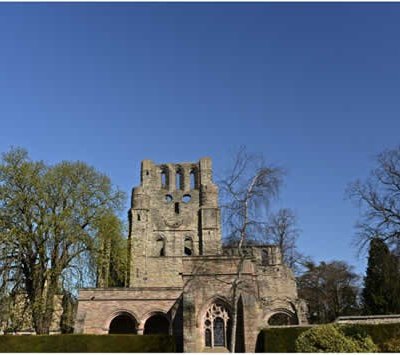 Kelso Abbey was the site of the crowning of James IV in 1488. It is said (but unattributed) that some of the dead of the battle were returned to Kelso Abbey for burial in the days following the defeat of the Scottish army. The town itself has many connections with Border history and especially with Sir Walter Scott.

Although a mere shadow of its former glory, the “pile of old stones” that is Kelso Abbey was David I's “greatest creation”. In the 1128 Charter to build the Abbey, David bestowed enormous grants of land and rents from properties all over Scotland and England.  At its pinnacle, this magnificent building covered a huge area. From its great wealth, flourishing markets and thriving wool trade, Kelso Abbey had an impact and influence far beyond the Borders
The Battle of Flodden (1513) marked the beginning of the end for this iconic building, its inhabitants and lands. Taking advantage of the confusion after Flodden, Dand Ker of Ferniehurst broke into the abbey immediately after the battle and installed his brother Thomas as the 30th Abbot.
The army of the Earl of Hertford destroyed the walls during the War of the Rough Wooing (1545) and stripped lead from its roof to make bullets.
Kelso Abbey
Post code for satnav
Abbey TD5 7BJ, Square TD5 7HF, Roxburgh Castle TD5 8LT, Kelso Old Parish Church TD5 7DH
Grid Reference
NT728338
Opening Times
Kelso Abbey: https://www.historicenvironment.scot/visit-a-place/places/kelso-abbey/
Kelso Old Parish Church: https://www.scotlandschurchestrust.org.uk/church/kelso-old-parish-church
Open access to Kelso Square and Roxburgh Castle.
Admission
Follow links above.
Facilities
Kelso Square has shops, cafes, banks and a hotel. Limited parking is available. The ruins of Roxburgh Castle have steep embankments and care must be taken when walking on them.
Parking
The Knowes Car Park in Kelso (TD5 7BH) is the most convenient for all the sites.
Directions
Kelso lies at the heart of the Scottish Borders. The four major trunk roads leading to and within the Borders are the A1 in the East, the A7 and A68 in central Borders and also the A697 from the South. The main roads into Kelso are the A698 from Berwick, the A68 from Newcastle or Edinburgh and the A699 from Selkirk.
Swap Start/End
To Top