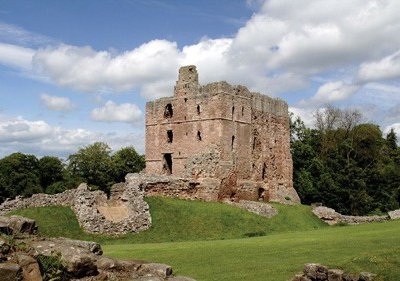 Norham Castle was established as a motte-and-bailey by the Bishops of Durham in the early 12th Century and within 100 years developed the stone form we see today.

It was captured by James IV during the last week of August 1513 after a five day siege, and protected both the eastern end of his supply lines and the northern end of his eastern flank.

The castle was also fought over during the Wars of the Roses (1455-1487) and the English Civil War and was made famous in the 19th Century through the paintings of JMW Turner.

Victoria Hotel, Masons Arms public house, village shops and a butchers shop which has won many awards.
Parking
In the English Heritage car park to the north east of the castle.
Directions
From Coldstream - follow the A697 to Cornhill then take the A698 towards Berwick for 6.25 miles. Turn left and follow signs to Norham. In the centre of the village turn right onto the village green and follow the road east. Norham Castle is visible on the hill ahead of you. Pass the castle to the car park on your left.

From Berwick - take the A698 towards Coldstream for 2.5 miles to Velvet Hall. There take the right turn signposted to Horncliffe and Norham Castle. As you turn the road goes between the abutments of an old railway bridge and forks. Follow the road left and continue for 2.5 miles until you see the castle on your right. Park in the car park on the right before the village.
Swap Start/End
To Top