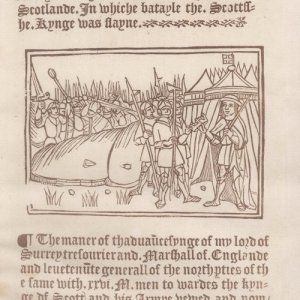 The transcription and translation of this document known as “The Trewe Encounter or Battle” is the first printed account of the Battle of Flodden. The undated document in Old English was written after the battle, probably by an Englishman from a verbal account, and closes with the words “Imprinted by me. Richard Faques, Dwelling In Poulys Church Yard”.

This account begins on 4th September, 1513 when the Earl of Surrey is in Alnwick and it was reported to him that the Scots had camped near Ford after taking both Norham and Etal Castles. Research has shown that he had already mustered a large army from Lancashire and Yorkshire and had been joined by another contingent of soldiers who had been transported by ship to Newcastle under the command of his son, Thomas. (E101/63/27 – National Archives at Kew)

In 1867, at the “Proceedings of the Society of Antiquaries of Scotland” a paper was presented by David Laing Esq. LLD (VPSA-Scot) who had discovered a printed document at a sale of autographs, and was able to identify it as a report of the Battle of Flodden. On closer inspection he was surprised to find it was almost an exact copy of the original document except that it included the missing pages.

It would appear that the person who initially made this report was not familiar with the area, as the account states that “My Lord Surrey . . . removed to a field called Wooler Haugh within 3 miles of the King of Scots”. Flodden Hill is in fact nearer 7 miles from Wooler Haugh, and in the extra pages it also states that on 8th September the whole English army moved from Wooler Haugh to Barmoor “within sight of the King of Scots, at the furthest from him within 2 miles”. At the closest the English army would never be nearer than 5 miles from Flodden.

Many books have been written about the Battle of Flodden by a number of eminent authors, all of whom appear to base their work on “The Trewe Encounter”, albeit with their own interpretation of the circumstances.

These are only some of the many questions remaining after reading this document, but going back to the original primary sources has given me the opportunity to try to understand much more of the circumstances surrounding the battle and to realise that subsequent reports are not completely reliable. There is always the temptation to embellish - either accidentally or otherwise - any report passed by word of mouth and it would appear that this has occurred several times during the past five hundred years. My interest in the Battle of Flodden Field continues and I hope that in the not too distant future further evidence will become available so that many of these questions will be answered.