Hawick and the Hornshole Monument 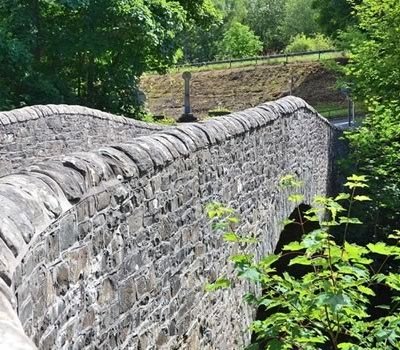 In 1514 a skirmish took place at Hornshole, a few miles out of Hawick, when English soldiers were pillaging the area which was still recovering from the disaster of Flodden. Local youth (most of Hawick’s men were killed at Flodden) rode out from the town, fought the soldiers and won, something which is still celebrated in Hawick every year through various ceremonies during the Common Riding. Today this Ecomuseum site is marked by a memorial near the bridge.

Tradition tells us that every man from Hawick between the ages of 16 and 60 was lost at the Battle of Flodden. The following year a raiding band of English soldiers had been sent out to ravage what was left of the (Scottish) Border.

A group from Hexham Priory camped overnight at Hornshole, near Hawick, where they were challenged and defeated by a group of Hawick Callants, who stole their pennon (flag) and returned to the town victorious.

Ever since then a replica of this flag has been carried by a young unmarried male (the Cornet) during the annual Common Riding celebrations.
Post code for satnav
TD9 8SU
Grid Reference
NS795316
Opening Times
Open acccess.
Admission
Free.
Facilities
Information boards on site.

Local facilities: Hawick is two miles from the monument.
Parking
Limited roadside parking - please park sensibly.
Directions
To Hornshole monument. This is situated approximately two miles from Hawick Town Centre just off the A698 onto an unclassified road. From Hawick take the A698 and turn left after Linden Lodge. From Denholm turn right after Riverside Caravan Park.
Swap Start/End
To Top