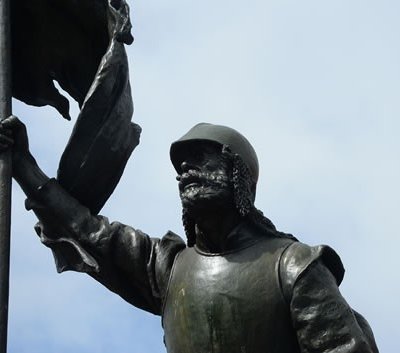 The Historic border town of Selkirk has many associations with Flodden both past and present. Ecomuseum site Halliwell’s House Museum has displays relating to the border reiving and also to Flodden. These include two artefacts that have the firmest provenance of such items, a sword and the Macclesfield Banner.

The Fletcher Monument is a bronze statue of an armour clad figure (Fletcher) carrying that banner. It was erected in 1913. This statue commemorates the return to the town of the only survivor of 80 Selkirk men who joined James IV at the Battle of Flodden. Fletcher is said to have returned with a banner captured from the English and in his exhaustion and despair to have cast it to the ground. The market place is said to be where Fletcher returned to and collapsed after the battle and it is where each summer this poignant aspect of the Flodden story is commemorated at the Selkirk Common Riding, in which the Casting of the Colours by the Standard Bearer, followed by a two minute silence, is a principal and solemn moment. Halliwell's House is also located in the Market Place.

This monument was erected in 1913 on the 400th anniversary of Flodden. It commemorates Fletcher, who tradition has as the only survivor of the 80 strong contingent of Selkirk men that left the town in August 1513 to join King James IV’s army at Ellemford near Duns. Of these 80 men, only Fletcher was to survive the Battle of Flodden and return to Selkirk. It is said he arrived carrying an English banner, that of the Macclesfield contingent or ‘regiment’ (though there were no regiments in 1513 as we understand them today). On reaching the town he was too exhausted to speak, but waved the banner in the air before throwing it to the ground in despair.
Today these events are remembered every year during the Riding of the Bounds and the Casting of the Colours ceremony. The Selkirk Riding of the Bounds is the largest cavalcade of horses in the Borders Common Riding season. On the Friday after the second Monday in June of each year events start at 4am when the Selkirk Flute Band wakes the town. The banner is then drummed around the old town on foot before the Standard Bearer mounts his horse and leads a cavalcade around the bounds of the town. Later in the morning (around 11am) the Standard Bearer returns to the Market Square where he waves the banner then ‘casts it down’. This is followed by a parade of the town’s guilds of craftsmen who then also cast their banners down.
The Fletcher Monument was designed and made by Thomas J Clapperton and was erected in 1913. It stands in front of the Victoria Halls and is an armour-clad striding figure with an ensign of bronze upon a rough-hewn granite block with ‘Flodden Field’ carved on it. The base beneath this is granite polished ashlar on which a brass plaque reads "This monument, embodying the spirit of the Selkirk tradition and erected to Commemorate the Four Hundredth anniversary of the battle of Flodden Field, was unveiled by the Earl of Rosebury, KG, KT.  Andrew Lusk Allan Provost, 1913".
The Fletcher Monument is a listed grade B structure.
Post code for satnav
TD7 4JY
Grid Reference
NT47212873
Link
https://www.liveborders.org.uk/culture/museums/our-museums/halliwells-house-museum/
Opening Times
Open access.
Admission
Free.
Facilities
Shops, pubs, deli and accommodation.
Parking
In public parking bays and car parks in central Selkirk.
Directions
For the Fletcher statue walk from the County Hotel in Market Place in the centre of Selkirk. Follow the High Street to the north-east for 200m until it becomes Scotts Place. Continue past Chapel Street on the left and The Fletcher Monument is a further 100m along the road on the left. Halliwell House Museum is situated in the south corner of the Market Place.
Swap Start/End
To Top